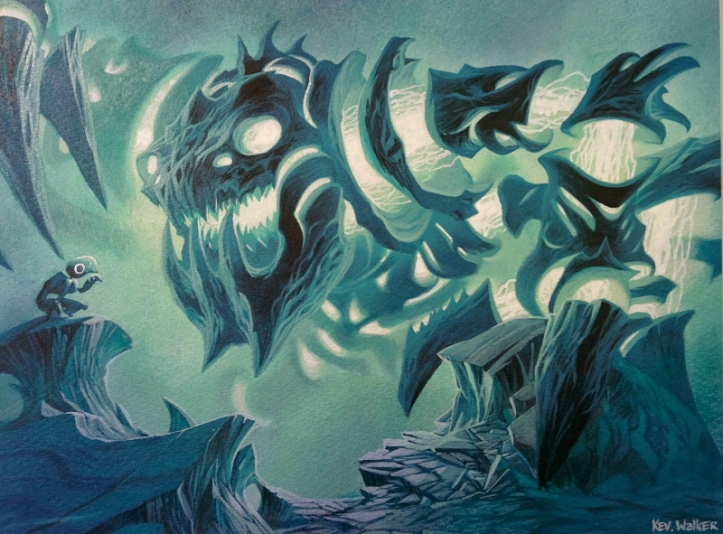 So put a complicated deck together then two days later realize you don’t have the deck you know how to play on you. So what do you do?

Well play the complicated deck I guess. Here’s the list. Something you guys will probably learn real quick is that I suck at side boarding.

Welp it’s a race I guess. I have a very good start dumping out 2 signal pest and an Darksteel Citadel, Mox Opal, Springleaf Drum turn 1 with Cranial Plating in hand. I manage to get my opponent down to 1 life and immediately realize I could have lethal’d him if I remembered to activate the Blinkmoth Nexus I played on turn 4 >.> I died to double Might of Old Krosa swing.

Game 2 opponent played Glistener Elf next turn Hierarch, then Groundswell (with landfall), Distortion Strike and a Mutagenic Growth while I had garbage hands that didn’t do really anything and having to mulligan all the way to a mediocre four >.>

Lesson Learned: Learn how to count and sideboard properly.

So my opponent this round was actually a teammate (We brought eight people) so I knew exactly what he was on. Unfortunately there’s not much to report because all I did all match was just affinity things, and turn dudes sideways for a clean sweep.

Lesson Learned: Temur is still not great in modern.

So opponent leads Faithless Looting discarding another faithless and a Jace Vryn’s Prodigy. I have an immediate suspicion that he was playing Goryo’s Vengeance, but I changed my mind when he played a Mana Leak. I still killed him pretty quick though. he did show to me he was playing four colors though.

On the draw he Thoughtseize’d me took the plating I kept the hand for. Good thing I topdecked a Signal Pest I dumped the turn one, six card special and saw a turn two stony silence. After some thought I decided to just play through it since my field had a Signal Pest, Ornithopter and a Memnite and I had an Inkmoth Nexus in hand. Turns out his draw was literal shit outside of the Thoughtseize and Stony as I kill him with him revealing 3 Griselbrand, 1 Borborygmos, and 3 Worldspine Wurm.

Order of events for soul crushing:

Basically the same thing happened again >.> about 100% sure it’s a bad matchup for my list at least.

Lesson learned: Talking to a fellow affinity grinder he said I should done -3 overseer and keep the Memnite in, while another said i should’ve boarded in the 2 Aether Grids. Also Mardu has way too much removal to not be good.

Game 1 I drew the nut racing hand to force his bolts south and did the good old plating ravager tricks to push the necessary amount of damage through for the win.

Game 2 Opponent was able to keep my creatures in check while having a creature on the board to pressure my life total. Basically had enough to get there. Oh well I guess it happens sometimes.

Game 3 I had a decent start I forced him into answering with his bolts and bolt accessories but he never drew the creature to be his necessary source of damage. eventually I was able to stick creatures as a result while he intentionally started holing lands in hand to try to Jedi mindtrick me into think he had something. little did he know that I elected to not play around anything and just go with my #1 goal in life.

Just kill the opponent, thankfully a top deck Master of Etherium holding two Cranial Platings is all I needed.

Lesson Learned: Vault Skirge is too good of a card.

Game 1 So this guy leads fairly poorly (in comparison) with a turn 1 Springleaf Drum and Vault Skirge. I curse myself for knowing nothing about the mirror match, but do hold up a colored mana source to answer his turn 2 Steel Overseer (turns out that card is pretty good in the mirror) and he doesn’t really assemble anything while I beat him down in the air.

Game 2 Opponent literally plays turn 1 Master of Etherium off double Mox Opal and I cry as he beats the crap out of me.

Game 3 I get the turn 1 Overseer he managed to answer with a Galvanic Blast but he doesn’t really assemble much until he casts two Thoughtcast to drop a lot of non creature artifacts. Turns out when you play Aether Grid with a lot of dudes in play, then you opponent plays an aether grid with lots of non creature in play he almost basically wins in the long run.

Lesson Learned: The mirror is cancerous.

Opponent fetches out an untapped Blood Crypt casts Faithless Looting discarding Loam and Darkblast. Cool it’s dredge. I had a quick looking infect kill hand, but because the presence of darkblast I decide to play a little conservatively and play the turn 1 Inkmoth, Ornithopter, Springleaf Drum, Vault Skirge. With a Ravager and plating in hand. Dropping the Ravager on turn 2 he blasts it at the end of turn I drop the Modular counter on the Vault Skirge without really sacing anything. He dredges the blast back up and passes back. I drop a top deck master of Etherium beat in for 4 pass back and he misplays a Conflagerate only dealing 2 damage to the Vault Skirge (who was a 3/3 due to the +1/+1 counter) passes back rereads master of Etherium cries a bit and I drop the plating for a lethal attack.

Opponent on the play Faithlessly loots away two Stinkweed Imps. I’m in fear of his nuts, but slam my hand face up on the table with 3 Ornithopters a Signal pest with another land and a Plating in hand. In the meantime my opponent dredged a Ancient Grudge into the yard but fails to play a green source all game for the flash back and concedes in response to my second Cranial Plating for well past lethal.

I’m on the play I look at my opponent i double check my hand I take about 2 mins to determine I’m keeping it. Ornithopter, Inkmoth Nexus, 2 Springleaf Drum, 2 Signal pest, Mox Opal. I present the seven card special any Affinity player should strive for. Opponent plays a basic island casts a Serum Visions I topdeck a freakin Arcbound Ravager… I cry happy tears as I slam in the turn 2 win.

It’s rough winning so fast as I literally couldn’t decide how to sideboard so I decided to just run it back. Opponent leads turn 1 Serum of yet another basic island I do my thing pass back he main phases an Opt fails to find a land passes back to me. I present a Cranial Plating swing in for 2 infect and pass back he faild to find yet another land determines I have lethal on board and scoops. During deboarding he tossed out 2 Shattering Spree’s and 2 Lightning Bolts so I could only assume he was on storm.

Game 1 opponent gets his turn 3 storm kill while I’m looking at a next turn lethal. Damn.

I manage to run out a decent board and play a turn 3 Grafdigger’s Cage and present another lethal board state. Opponent manages to counter my board state storming up 4 mana to for a Shattering Spree and a Gifts Ungiven for more rituals and the Past in Flames hits the Cage, Plating, and my dreams as he kills me on the next turn.

Lesson Learned: I need to play more affinity and take the time to learn my deck.

Affinity is a fun and great deck I didn’t really feel helpless and was able to turn match ups I normally fear into drag races. That’s cool, I think I’ll stick on the deck for a while just because of that.

Overall I finished 80th place for a 5-4 record recording 11 game wins of 20 meaning I had a 55% game win rate. I don’t think I did too bad for someone who knew almost nothing about the deck, but I did do a bit of a crash course watching YouTube videos and reading Pieter Tubergen’s sideboard plan he conveniently posted on the Affinity Facebook Group just the day before the event.

I don’t think there’s really any changes I want to make to the list right now, I’m not a fan of Rule of Law but after playing the Storm match up twice in a row I can understand why people would run it. I just think that I’d rather…. kill my opponent than rely on a single silver bullet. I could however see trading the 2 Grafdigger’s Cage for 2 Rest in Peace however. It kinda sucked to get blown out by a Shattering Spree and watching my opponent nut over the place on a turn 3 win.