I’ve developed an Affinity…. for Artifacts

So I’ve secretly always wanted to see more Affinity in my life. I love everything the deck has tries to do, and it works perfectly with this mindset that I’ve developed lately.

Affinity has a history in Magic: The Gathering, not the good kind, and it all started with Mirrodin.

You see Mirrodin introduced this new mechanic conveniently called Affinity and allowed one of the most powerful decks in standard history to exist.

This deck was more than good. It was stupid good. If you’ve played standard recently compare every card in this deck to Smuggler’s Copter and even then you probably won’t understand.

You see back in 2003/2004 there was a differet rule set to the game. This deck abused a rule that effectively allowed Combat Damage to go on the stack (this was later changed in the 2010 rules update). To simplify what that means right now there five steps on combat.

When we move to combat damage currently damage has been dealt and well stuff happens as a result. But under the pre 2010 era you could actually do stuff with that damage.

You see say i attack you with say… An Arcbound Ravager, 3 Arcbound Workers, and a Myr Enforcer. Well we move to the Damage step we have this on the stack:

Right now the total is 8 damage, but in 2004 you could do the following:

And the result is that you have increased Ravagers damage to just 8 instead of 1 dealing 15 damage in total instead. This isn’t including any other artifacts, or even something like Disciple of the Vault which only further increased the damage potential.

At least to my understanding that is. You see I didn’t really play any form of sanctioned or competitive MTG until around… Innistrad missing a whole wave of exciting times. But my first experiences was in casual games vs a friend. This guy played cards like Grim Monolith, Voltaic Key, Urza’s Tron lands and the like which powered out powerful artifacts such as Mycosynth Golemn, Memnarch, Myr Battlesphere, Blightsteel Colossus. While I played……….

Yeah not as exciting right? Well I was literally running what I opened out of booster packs at the time which was cool I guess.

Anyways playing against these big dumb things taught me one thing. I like artifacts, in fact Artifacts are probably some of my favorite cards in MTG and I always find myself brewing with them and they just never feel competitive. 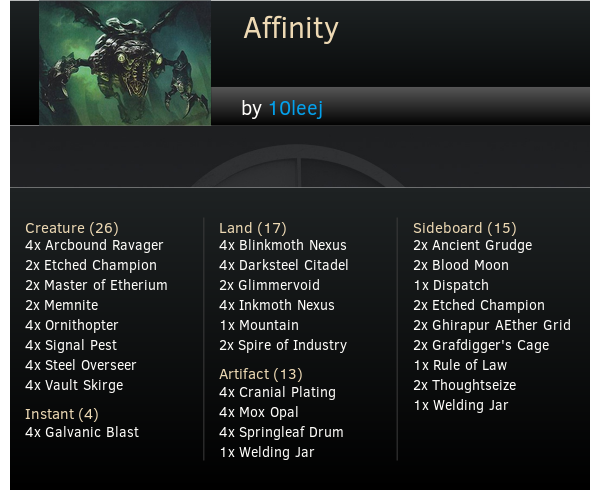 Effectively for as long as Modern has been a format, the deck called Affinity has existed. It’s still playing roughly the same shell it always had and the deck is just simply… Stupid Powerful. Is it as strong as the old Ravager Affinity list? Well, we can’t really compare the two as they were both effectively from different eras and the game was very different back then.

Why am I talking about Affinity though? Well….

I might’ve actually bought it. I played the deck just yesterday at SCG Regionals not even two days after I got it assembled to a 5-4 finish. Which is not bad for someone who doesn’t really know too much about what their doing.

One thing I learned really quick though is that I’m terrible at figuring out combat math, hopefully this deck helps with that bit man it’s hard to know what to do when you have a Master of Etherium, Arcbound Ravager, and a Cranial Plating in play and your opponent has blockers. I have plans to keep this deck around and I’m definitely gonna play it for a good while (at least right now) so this blog might get filled with a lot more content for it. So I’ve made a nice new tag for it.

That’s all I have for now. Go play some good games of magic, wreck some nerds, eat chicken, get a Frosty from Wendy’s, and as always…. I dunno what to put here kinda just wanna rip off MTGPackFoils (another local blogger), yeah lets do that!